I’d been intrigued by GTFO: The Movie, Shannon Sun-Higginson’s indie documentary about sexist harassment in gaming culture, since I learned about it at South by Southwest in March of 2015. Of course, I didn’t sell my soul for a SXSW film festival pass, so I wasn’t able to catch it when it was in town, but it finally went up on Vimeo, iTunes, and the like and now that I’ve seen it I can say with confidence that it was worth the wait. As a woman who plays video games, it didn’t necessarily tell me something I couldn’t have imagined or guessed at before, but it built the perfect spring-board for a continued conversation about misogyny, media, and society.

In the film, journalist and gamer Maddy Myers, Dragon Age writer Jennifer Brandes Hepler, activist and cultural critic Anita Sarkeesian, and an array of other women from the gaming world shared how they fit into it and when things went terribly wrong for each of them (i.e. online harassment, discrimination, and even rape and death threats). While the women themselves often told their stories with a wry smile, seeing and hearing the explicit, horrific messages sent their way was incredibly uncomfortable and scary. But that’s not the sole focus of the film. The movie examined several aspects of the game industry including marketing, character-design, multi-player online games, and competitive gaming. It also delved in-depth into two major events in recent gaming history: Capcom’s reality show Cross Assault, and the #Gamergate controversy (the latter of which seemed like a last-minute addition, but more on that later). 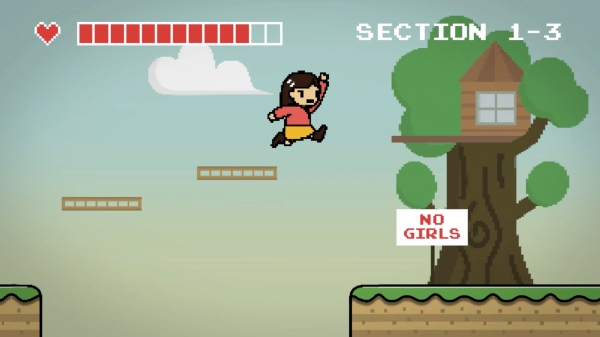 The film touched on a lot of things I myself think about on an almost daily basis, like what it means to make gaming an integral part of your identity or how to go about changing a toxic culture. What I really appreciated about it, though, was that it broke down a few stereotypes about gaming along the way, including:

If You Play Your Cards Right, You’re Safe

People often believe that the only gamers being harassed are the women who ‘flaunt’ their gender or otherwise invite criticism. But I think Todd Harper, author of The Culture of Digital Fighting Games and another voice in the film, said it best when describing Miranda Pakozdi’s reaction to her time on Cross Assault. He believes women who play games are given two unappealing choices: they either don’t point out the harassment they/their peers experience in order to protect themselves and to continue doing something they love, or they speak up and at best, receive backlash, but at worst, are isolated from their own community. There’s really no ‘safe’ option for girl gamers.

Again, the film’s examination of Cross Assault does a great job of debunking this myth. The fact that Aris Bakhtanians felt comfortable touching, smelling, ogleing, and heckling Miranda on camera and telling a reporter point blank that “sexual harassment is part of [fighting game] culture” shows that anonymity is not what produces this behavior. Rather, it’s a set of beliefs. Of course Aris, and the folks involved in Gamergate, are not the only people whose actions and attitudes are harmful to women, and these beliefs didn’t appear out of thin air. Which brings me to the last, and in my opinion, most important point…

Gaming is More Sexist Than X

Many people outside of the gaming community perceive the video game industry to be somehow more misogynistic or more toxic than the rest of the world, or to be at fault for sexist behavior. But as Harper and Sarkeesian point out, gaming doesn’t exist in a vacuum. It’s a form of media just like television, film, or music and it reflects the same attitudes we carry into all aspects of our day-to-day lives. That the rest of society seems eager to look to games as a cause of misogyny, or to call it out without examining other media, is willfully short-sighted and a point of contention among many gamers.

While the film isn’t exactly polished – shots are reused, quality varies from scene to scene, and the Gamergate montage was clearly added after the rightful end of the film, delivering a somewhat jarring/dissatisfying close – the ideas it explores are integral to the understanding of gaming culture and how it fits into the greater context and history of sexism; the animation and score are enjoyable; and director Shannon Sun-Higginson rightly continues the conversation online.

Have you watched the movie? What were your thoughts? Share them below, or find out where you can watch here.