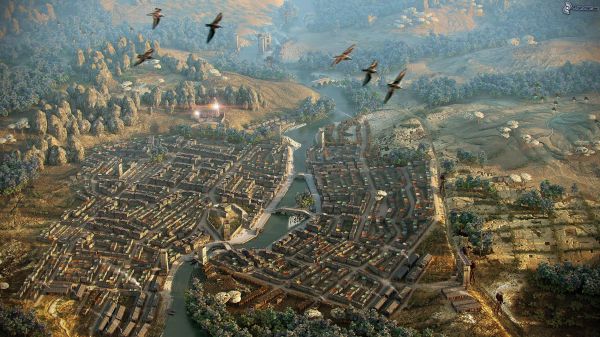 It’s been awhile since my last Flashback Friday, but this (belated – sorry!) post goes out to the game that cemented my love of the medium and took me from kid who gets her dad to kill the big bosses to capital ‘P’ player–The Elder Scrolls III: Morrowind. Morrowind is an open-world, fantasy RPG released in 2002 by Bethesda Game Studios. Set in Tamriel, the game takes place on the island of Vvardenfell in the Dunmer province called (you guessed it) Morrowind.

You play as a prisoner kidnapped and sent to Morrowind on a slave ship, and are eventually recognized as a reincarnation of the Dunmer hero Indoril Nerevar, prophecied to defeat Dagoth Ur and his followers, The Sixth House. If that sounds like a bunch of crazy gibberish to you, that’s just the beginning.

The dense, beautifully complex universe and lore of The Elder Scrolls series are just one of the many things that make the game so enjoyable. The series’ free-form gameplay also contributes to its wondrous immensity; when you arrive in Morrowind, you are an unknown with little skill or money and even less direction. A herd of rats or a (g*ddamn piece of sh*t) cliff racer could kill you with ease, and in fact they do, many times over.

This difficulty, along with the game’s openness, depth, and (at the time) stunning graphics, makes Morrowind a challenge you can’t wait to face. It received generally good reviews upon release, but has accrued a large and incredibly dedicated cult following since then. So dedicated that a group of fans are working together now to create a non-commerical mod for Skyrim that remakes Morrowind in the Skyrim engine.

Of course, any remake (and especially one that plans to re-imagine many of the smaller quests and plot points of the game as it changes the mechanics behind them) is going to lose a little something of what made the original so important to its die-hard fans. For Morrowind, that list is longer than the 36 Lessons of Vivec, but a few stand-outs would be:

The fighting mechanics are…special. The Unofficial Elder Scrolls Wiki describes Morrowind combat as “straight-forward,” but first time players more accustomed to the combat of Skyrim and other contemporary RPGs do not find it quite so simple. And really when you think about it, a lot is going on behind the scenes of each fight in the game. On top of that, you can conceivably kill people who are important to your quest without knowing it and totally screw yourself over, which while frustrating, adds gravity to your decisions that is absent in many other games.

Once you have a decent understanding of this deceptively complicated system, however, you can take advantage of it in countless ways, from levitating everywhere you go to smithing a weapon or making a spell that damages and heals your opponent at the same time to up your skill. You get as much out of Morrowind as you put in, and the game rewards creativity.

Speaking of skills and leveling, there are a LOT of skills in Morrowind. 27 to be exact, compared to 21 in Oblivion and 18 in Skyrim. Skills are distinct from attributes like race, class, and gender. You can create your own class from scratch, and are best off if you map out your skill trees in advance, which makes the characters and role-playing delightfully immersive and customizable, but also very time-consuming.

This has got to be one of my favorite things about the third ES game. NPCs are not fully voiced, and many of the recorded lines are randomly repeated by different characters. This produces, in my opinion, some of the funniest character interactions in gaming history (and I say that having heard the bizarre, sometimes offensive, always hilarious things students yell in the halls of Hogwarts in the Harry Potter games).

There are entire forums devoted to this topic, so I won’t list all of the famous NPC lines here. The combat lines were the most memorable for me (“There is no escape!!!”) and are most enjoyable when you picture the character saying them as you’re decimating them in a fight. Of course they probably stick in my mind because I became irritated hearing them over and over as my character once again succumbed to death.

This aspect of the game may not change much with the Skywind mod, but of all the Elder Scrolls games I’ve played, Morrowind has the best soundtrack hands down. The soaring, epic tones of the main theme hit me right in the nostalgia, and some of the more playful pieces lift my mood as soon as I hear them. While the soundtracks of Oblivion and Skyrim are by the same composer, neither have quite the same awe-inspiring, world-conjuring effect on me.

Morrowind can be a quirky, buggy, and frustrating affair and, like any video game you grew up loving, the graphics and mechanics have aged rapidly as the industry makes leaps and bounds forward technologically and artistically. (Just look at the difference between the original Duke Nukem or Tomb Raider graphics and their 2013 reboots) But many fans would argue that the game is a masterpiece not in spite of those aspects, but because of them. And the massive world, intricate lore, beautiful art direction, and inspiring music don’t hurt.

Morrowind doesn’t give you anything easy, but the work you put in to advance through and even help write the story makes playing much more meaningful. The game magnifies what makes gaming special: the interactive and collaborative storytelling that allows you not just to experience a world, but to shape it.